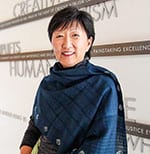 Angela Oh has extensive experience in non-profit leadership, public service, and as a trial lawyer in private practice litigating civil rights cases. Angela served as the executive director of a non-profit organization dedicated to peaceful resolution of conflict and was a founding member of the National Asian Pacific American Bar Association and recipient of its Daniel K. Inouye Trailblazer Award. Angela has been Chairperson of Senator Barbara Boxer’s Federal Judicial Nominations Committee, a member of the US Magistrate Judge Selection Panel, a member of the LA City Human Relations Commission, and on the Advisory Board to the President’s Initiative on Race during the Clinton administration. In the late-1990’s, inspired by Zen studies, Angela began efforts to move from litigation to party-engaged approaches to resolution. Angela joined the CRD as an Attorney Mediator 2013 and works in the Dispute Resolution Division’s Los Angeles office.