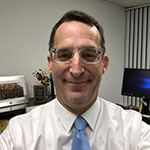 Mike Miller has served the state of California for 14 years. Prior to joining CRD in February 2019, he served as Deputy Commissioner of Administration at the Department of Business Oversight. He formerly served as Chief of Staff at the Department of Motor Vehicles. He has extensive experience managing administrative functions including human resources, fiscal management and budgeting, and business operations, including facilities issues, contracts and purchasing, security and property. Mike has overseen multiple divisional and departmental reorganizations, led projects to construct new facilities, implemented workplace technologies, and redesigned departmental intranet sites. He has extensive experience implementing workplace procedures, including coaching and upward mobility programs.

A graduate of Sac State’s Leadership for the Government Executive program, Mike volunteers as a sponsor for the Leadership for the Government Manager program. Mike has previously worked as a legislative analyst, strategic planner, and departmental spokesperson. He began his career in journalism as a news producer, reporter, photographer and editor at multiple television stations, including KCRA, and later owned and operated his own personal chef company.