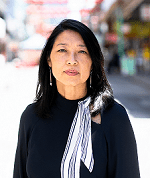 Cynthia Choi (she/her) is the co-executive director of Chinese for Affirmative Action, a community based civil rights organization committed to protecting the dignity and fair treatment of all immigrants and fulfilling the promise of a multi-racial democracy. Cynthia is also co-founder of Stop AAPI Hate, a national coalition addressing anti-Asian racism across the U.S.

Cynthia has over 30 years of experience working in the nonprofit sector based in California and over 20 years serving in leadership positions. She has led local, state and national community based organizations and initiatives working on a range of issues from reproductive justice, gender violence, violence prevention, immigrant/refugee rights and environmental justice issues. She is a daughter of immigrants and a native Californian, raising three daughters of her own and is deeply committed to creating a world that is socially just.

Along with Stop AAPI Hate cofounders, Cynthia has been recognized and commended for her work to advance racial equity. Most recently, Politico recognized Cynthia as one of 2021’s top 40 influencers on race and politics. She was profiled in the New York Times, “10 Women Leaving Their Mark on the World.” She was also named as one of the TIME100 List of Most Influential People in 2021, Bloomberg 50: The People and Ideas That Defined Global Business in 2021, and a Webby Social Justice Movement of The Year recipient. She has been featured in The Washington Post, The New York Times, Associated Press,PBS NewsHour, The Guardian, The Los Angeles Times, The San Francisco Chronicle, BBC, CNN, NPR, USA Today, Time Magazine, Huffington Post, Axios, Vox Magazine and numerous other major news outlets.