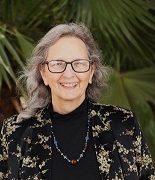 Andrea Beth Damsky, L.Ac. is a National Board-Certified Acupuncturist, herbalist, and nutritional consultant. Andrea Beth is also an environmental activist who has been serving on the Environmental Sustainability Commission of La Mesa CA since 2017, and is currently in her third year as its elected Chair. Climate change, environmental activism, drought, food insecurity, racial justice, police reform and equity are among the many issues Andrea Beth champions. Voting rights, healthcare access, housing the unhoused, and access to clean air and water are among her top current issues of concern.

Originally from New York, Andrea Beth cut her political eye teeth at the tender age of 11, when she helped launch and staff Baldwin’s Efforts to Salvage Trash (BEST), one of our nation’s first recycling centers in Baldwin, NY. During her 20’s she was involved in feminist politics as President of the Atlantic City, NJ chapter of National Organization for Women. The 1980’s also saw her active in LGBTQ+ activism, AIDS issues, abortion rights, and electoral campaign work; these issues have driven her activism for the last 40 years.

In 2021, Andrea Beth was Co-Chair of San Diego Pride’s DevOUT LGBTQ+ Interfaith Coalition. A lay cantorial soloist, Andrea Beth often represents the Jewish community in interfaith demonstrations of solidarity with the LGBTQ+ community in San Diego County. She speaks at city council meetings and press conferences in support of marginalized and targeted community groups as a faith leader who experiences hate through a triple lens: as a woman, as a Jewish person, and as a lesbian. Andrea Beth is a former Hebrew school teacher, Bar and Bat Mitzvah tutor, and synagogue administrator, who enjoys co-leading worship services in the San Diego Jewish community.