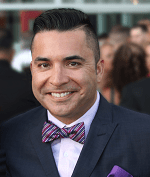 Russell Roybal is a long-time leader in the Latinx and lesbian, gay, bisexual, transgender and queer (LGBTQ) movements. They previously served as Chief Advancement Officer of San Francisco AIDS Foundation (SFAF) and worked alongside the organization’s development, volunteer services, marketing and communications, and AIDS/LifeCycle teams. They lead the fundraising, volunteering, communications and branding efforts that resourced the organization’s programmatic efforts and advanced the mission of SFAF to achieve health justice for all.

In addition, Russell was deputy executive director at the National LGBTQ Task Force, where they directed programmatic and policy work, and the National Conference on LGBT Equality: Creating Change. Russell also served as deputy executive director of external relations, and as director of movement building at the organization. The Task Force advances full freedom, justice and equality for LGBTQ people.

Russell has served on the staffs of the Gill Foundation, LLEGÓ – the National Latina/o LGBT Organization, the San Diego LGBT Center, and San Diego Pride. In addition to their staff roles, Russell has served on the board of directors of the National Committee for Responsive Philanthropy, the National Gay and Lesbian Task Force, the International Imperial Court System, and the Grassroots Institute for Fundraising Training. They are currently on the boards of OutRight Action International, Springboard Health Lab, and chair of the Rockwood Leadership Institute.

Russell was honored by the California LGBT Legislative Caucus as a Pride Honoree in 2017 and was named Grand Marshal of the San Diego LGBT Pride celebration the same year. They are also a recipient of the Harvey Milk Social Justice Award and the Jose Julio Sarría Civil Rights Award. Russell was the inaugural recipient of the League of United Latin American Citizens (LULAC) Equality Award.

As a Latinx, male-bodied, non-binary queer leader, their activism is rooted in a family tradition of public service and the pursuit of social justice. Russell was born in Hollywood, grew up in La Puente, California and now resides in San Diego.