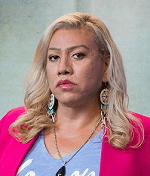 Bamby Salcedo is a prominent and celebrated transgender Latina activist, known all over the world for her passionate and productive social, political, and economic influence. As the President and CEO of the TransLatin@ Coalition, Bamby steadily leads this nationally recognized organization that advocates for and addresses the issues of transgender Latinas throughout the United States. Bamby received her Master’s Degree in Mexican and Latin@ Studies from California State University, Los Angeles, and also developed the Center for Violence Prevention & Transgender Wellness, a multimillion, multipurpose, multiservice space for Trans people in Los Angeles.

Bamby’s wide-ranging activist work has brought visibility and given a voice to not only the trans community, but to countless others whose efforts focus on critical topics that include immigration, HIV, at-risk youth, LGBTQIA+ issues, incarceration, and more. Through her dynamic leadership, Bamby has developed several organizations that have created networks and connections where there were none, and she, to this day, tirelessly advocates for the rights, dignity, and humanity of those who are often silenced. Determined to affect change at every level, Bamby actively engages and supports many local, national, and international organizations and planning groups.

As a recognized public speaker, Bamby’s experience has an extensive range. She has expertise in presenting to governmental bodies, human rights and social justice organizations, and universities and colleges, as well as speaking at demonstrations and rallies and testifying as an expert witness. Bamby has also appeared at national and international conferences as a featured speaker. She speaks to diverse audiences on varied topics and intersecting issues that include transgender-related issues, social justice, healthcare, social services, incarceration, immigration, and detention as well as professional and economic development for transgender people.

Thanks to her impassioned and impactful influence, Bamby has been invited several times by the White House to participate on a multitude of panels. In 2015, she proudly shared the stage with President Biden at the United States of Women Summit and later that same year she spoke at the Transgender Women of Color and Violence and LGBTQ People of Color Summit. In 2021, Bamby visited the White House again to speak as an invited guest and valued advocate on the issues of safety, inclusion, as well as opportunities for transgender individuals. Bamby was also invited to testify before Congress to speak on the Equal Rights Amendment with the ERA Coalition, for which Bamby serves as a board member. Bamby was humbly honored to participate in the hearing and always ensures that our elected officials learn firsthand how people are impacted by the policies and laws they create.

Bamby has also had the honor of being the opening plenary speaker at several conferences, including The 2018 National Sexual Assault Conference, the 2015 National HIV Prevention Conference, and the United States Conference on AIDS in 2009 and 2012. She has participated as a facilitator with The PanAmerican Health Organization where she helped develop the blueprint on how to provide competent health care services for transgender people as well as health care for LGBT people and human rights in Latin America and The Caribbean.

Bamby is known for communicating in deeply powerful, sobering, and inspiring ways that align beautifully with her warm, down-to-earth presence. She speaks from the heart, as one who has been able to transcend many of her own issues, issues that have derailed and paralyzed countless lives, including at times, her own. Bamby’s words and experience often summons both tears and laughter and her life story has been the subject of two documentary films, “TransVisible: Bamby Salcedo’s Story” and “LA QueenCiañera.”

Bamby has been featured and recognized in multiple media outlets such as People en Español, Latina Magazine, Cosmopolitan, the Los Angeles Times, Los Angeles Magazine, OUT 100 and featured in the HBO documentary The Trans List, among many others. Bamby has also been recognized and awarded for her outstanding work by multiple national and local organizations.