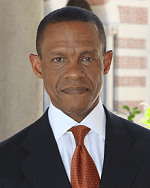 Dr. Erroll G. Southers is the Associate Senior Vice President of Safety and Risk Assurance at the University of Southern California, responsible for overseeing the Administration Division’s Safety Departments – the Department of Public Safety, Environmental Health and Safety and Fire Safety and Emergency Planning. He is a former FBI Special Agent, who served as a Professor of the Practice in National and Homeland Security, Director of the Safe Communities Institute and Director of Homegrown Violent Extremism Studies at the Sol Price School of Public Policy. He was President Barack Obama’s first nominee for Transportation Security Administration Assistant Secretary, and he was also California Governor Arnold Schwarzenegger’s Deputy Director for Critical Infrastructure of the California Office of Homeland Security.

Dr. Southers’ career has spanned all levels of law enforcement, formerly serving as Assistant Chief of Homeland Security and Intelligence at the Los Angeles World Airports Police Department. He previously enjoyed the distinction of FBI Special Agent and SWAT team member, as well as Santa Monica Police Officer. He also served on the faculty and tactical staff of the Rio Hondo Police Academy. Dr. Southers is a member of the International Association of Chiefs of Police (IACP) Research Advisory Committee, the DC-based Homeland Security Experts Group, Co-Chairs the USC Department of Public Safety Community Advisory Board, Co-Chaired the USC Sol Price School of Public Policy Social Justice Advisory Board, served as an Ex-Officio member of the USC President and Provost’s Task Force on Race, Equity, Diversity and Inclusion, and serves on USC Governing Board of the University Clinical Services.

Dr. Southers holds roles throughout the international counterterrorism and national security arena, including: Visiting Professor at the University of Paris II Panthéon-Assas and Honorary President of the French Federation of Psycho-Criminalistics; Fellow and member of the Professional Advisory Board and Visiting Professor at the International Institute of Counter-Terrorism in Herzliya, Israel; an adjunct subject matter expert for the RAND Corporation; and sits on the International Institute for Justice (IIJ) and the Rule of Law Advisory Board and IIJ Expert Roster in Malta. He is also the Managing Director of the Counter-Terrorism and Infrastructure Protection Division for TAL Global Corporation, an international security and risk management consulting firm.

Dr. Southers served in roles at the Los Angeles County Museum of Art (LACMA) for eleven years, where he was the Assistant Vice President for Visitor Services and Chief of Protective Services. LACMA is the fourth largest art museum in the nation, where he was responsible for the largest contract museum guard force in the country. He managed safety and security responsibilities for the institution, overseeing the Americans with Disabilities Act (ADA), Injury and Illness Preparedness Program and Occupational Health and Safety compliance.

Dr. Southers has testified before the full Congressional Committee on Homeland Security on several occasions, including the first Congressional Hearing on the Boston Marathon Bombings, as a subject matter expert and counterterrorism analyst. At USC, he developed the Executive Program in Counterterrorism, the Homeland Security and Public Policy and American Contemporary Homegrown Violent Extremism courses in the Sol Price School of Public Policy, where he received the 2014 Outstanding Doctoral Project Award, was named the 2013 and 2014 Outstanding Adjunct Professor of the Year and earned the 2018 Sol Price School Robert Biller Outstanding Faculty Award. He is a regular contributor to national and international media networks on matters of terrorism and national security, the author of Homegrown Violent Extremism and member of the USA Today Opinion Board of Contributors.

Dr. Southers was the recipient of the Earl Warren Outstanding Public Service Award, was recognized in Security Magazine’s Top 25 Most Influential Industry Thought Leaders in the United States, and was a member of the Los Angeles Mayor’s Blue Ribbon Panel on Airport Security at LAX. He earned his undergraduate degree from Brown University, and he holds masters and doctoral degrees in public policy from USC.