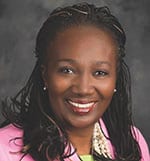 Sharon Godbolt began her legal career in 1992 and has been a mediator since 2006. She joined CRD’s Dispute Resolution Division as an Attorney Mediator in 2014. Prior to becoming a mediator, Sharon was a partner in Kelly, Godbolt and Simon (KGS) Law Firm and also ran her own law firm, the Law Office of Sharon A. Godbolt, in Silicon Valley, where she practiced family law, probate, wills and trusts and contract law. Sharon has also served as a mediator and Judge Pro Tem for Santa Clara County Superior Court, as a Planning Commissioner for the City of San Jose, and as a Judicial Extern for the California Court of Appeal. Sharon earned her J.D. in 1992 from the University of California, Hastings College of the Law, and her B.S. from Robert Morris University, Pittsburgh, PA. She is the recipient of numerous community service awards, including the Santa Clara County Bar Association’s Unsung Hero Award, Santa Clara County Black Lawyers Association’s President’s Award and Minority Bar Coalition’s Unity Award. Sharon works in the Dispute Resolution Division’s Elk Grove office.b