Read real-life stories about how DFEH is protecting and enforcing the civil rights of all Californians. 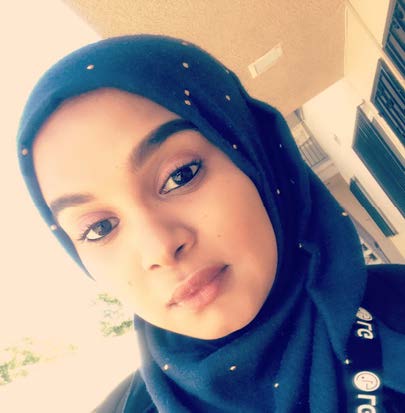 DISCRIMINATION BASED ON RELIGION

When Khadija Osman applied for a job as a cashier, she asked the interviewers if she could wear a scarf and clothing that are a part of her religious observance. Her prospective employers questioned and objected to her attire, eventually rejecting her bid for a new job. She knew she had rights, but she didn’t know what to do about it until friends told her about an organization that would fight for her rights.

What was your experience that led you to seek out help from CRD?

I went to an interview for a cashier job at Wing Stop in Paradise. I thought the interview was going well with two managers. They were asking questions and I was giving good answers – I had experience as a cashier. I asked if I could work wearing my scarf. The manager said I could not work with my scarf because it was corporate policy and it was a safety hazard. I told her that I didn’t wear the scarf for fashion, it is my religious belief. She said she would ask corporate and get back to me. A day or two later, she called me back and told me that I could wear a turtle neck shirt and wear a head wrap, but not the scarf. I also asked if I could wear a long denim skirt because I was not allowed to wear jeans. She argued that there were other women who wore scarfs and jeans. I told her I could wear a jean skirt and a shirt that was the corporate color. She said my religion had a lot of restrictions and she would get back to me, but she never did.

How did that experience affect you?

I was really upset. My family came here as refugees escaping a dangerous life when I was five months old. I have worn the scarf for most of my life and I have applied to many jobs. This was the first time I encountered this type of rejection. I was really hurt by it. I had heard of others being discriminated against, but I had never experienced it until then. I knew it was my right to wear it and that the company was wrong, but I didn’t know that there was something that I could do. I shared a post on my Facebook because I felt so rejected. My friends told me about CAIR (Council on American-Islamic Relations). They said don’t just stay quiet. I called CAIR and they told me it was unlawful discrimination. Honestly I just wanted the job. I just wanted them to accommodate me.

What do you want people to take away from your experience?

I want people to know that as an individual you are not helpless and that there are organizations that can help you. You can do something to stop discrimination. Change starts with one person. In order for change to happen you’ve got to use your voice and speak up about it. I thought I didn’t have a voice, but I did have a voice.

What do you want people to know about discrimination based on religion?

I want people to know that they should reach out and seek help if they are being discriminated against because of their religious practices. There is a system in place to help you. But if you just stay quiet, there will be no solutions.

How was your experience with CRD?

CAIR directed me to CRD. The CRD staff understood the situation and they believed me. They weren’t afraid of going up against a big company or franchise. They were willing to fight for me.